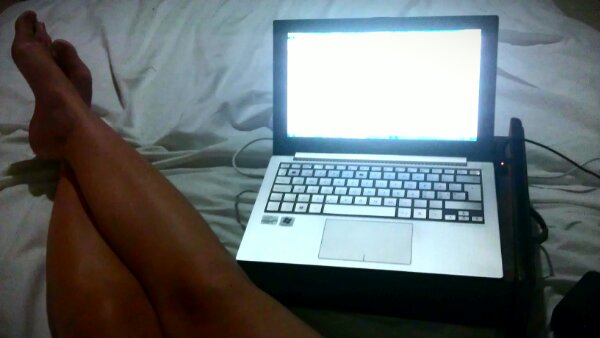 Too lazy to go to the office today despite that beautiful screen I could have been using instead. Yesterday I went back to the office after a friend had dragged me out for dinner and ended up staying until so late that my taxi driver laughed when I called him “The office? Now? I thought I would be picking you up from a club at this hour!”

Today has been slower, and I even found a moment to have a nice lunch, swim and get some sun.

Now I’m back by the computer but I don’t have airconditioning in my room, and it’s very very hot (36’C), so I am using a drawer to keep my computer from boiling over and burning my legs.

I do have a proper table at home, but it’s out there.. in mosquito zone. My room has one of those electric Raid plugs so it’s safe. (They actually work!) All I have here are shy spiders and giant jumping ants, I don’t mind them – they don’t care about my blood. (And it’s hilarious when they jump.)