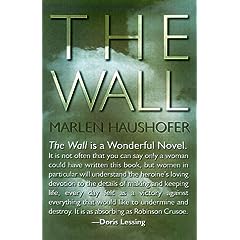 Nearly forgotten after her death in 1970, Haushofer began to attract attention again when this novel was republished in the 1980s. Although it is described by the publisher as “a startling redefinition of ecofeminist utopian fiction”,  this first-person narrative has been characterized by most commentators as dystopian. The Wall is a wonderful, profoundly moving novel about a woman who is staying in a remote hunting lodge in an alpine valley and wakes up one day to find there is an invisible wall between her and the rest of the world. Imprisoned on the mountainside, the unnamed narrator recounts her struggle to survive and her attempt to discover the essence of her own personality, femininity, and humanity. She finds a dog, a cat and a cow and learns how to deal with the wildlife around her. Each of the animals is a wonderfully drawn character which she draws great comfort from and The Wall itself is a very fascinating phenomenon, it could be symbolic of psychological or political isolation. The minimalist plot is enhanced by rich description and wise insight, and the translation succeeds in capturing the author’s fluid, lyrical style.

I merged some reviews and here it is, the Wall, die Wand, the book I’ve been looking for for years! I googled, googled again, and found it! Seems like it really was good, it wasn’t just my imagination.. but I can’t believe I actually read this when I was 12, that’s crazy. haha I will read it again now, 2,5 euros from Swedish Adlibris.. More expensive through Amazon. Order it!