A bus from Belgrade took us to Kosovska Mitrovica.

It left us on the serbian side of the city and the busdriver was going crazy about the fact that our plan was to cross the bridge (oh my god, you are not crossing the bridge!!) to Kosova.. as if it was the craziest thing ever.. we didn’t really care, we are not serbs and we don’t have any reasons to freak out about going to Kosovo.

So, the problem was not the rain that poured down or the fact that we got dropped off in the middle of a random anonymous road in the middle of nowhere.. the problem was that we couldn’t find any taxidriver that wanted to take us to the other side of The Bridge. There was a police-car guarding it.. and nothing else. The taxidrivers we stopped just went “oh oh, no no.. I don’t go south.” and drove off. Some hyped-up serbs eventually found us a taxidriver in a yellow car named Albani that they kind of forced to drive us to the busstation on the other side.. he didn’t want to.. he looked genuinely scared, took his seatbelt on.. and we went over.. slowly.

I don’t freak out about things like this since I know that I’m not a target, but 40year old men looking scared and calling me crazy kind of got to me and I wondered how much of a danger we had actually put ourselves into.. it was after all a warzone.. not.

We crossed and got to another world. Mitrovica. It was chaotic, filled with people, kosova flags, shiny cars and horses on the main street. I loved it from the back seat of my taxi, taking heaps of pictures. Unfortunately the taxi driver didn’t find the city safe for us, it was getting late and the bus for Prishtina was already leaving. He took us to the busstiation, we jumped on, waved sad bye-bye’s to Mitrovica and drove off for a 3hour ride that cost us 1,5euro. 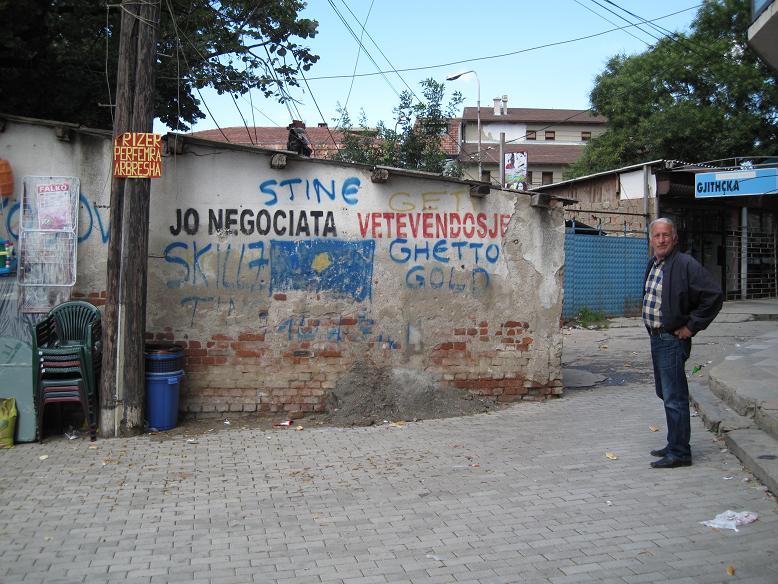 Prishtina was great. The people in Kosova are extremely nice and we met a really nice guy who showed us around and talked about his music-channel and the vip parties of Kosova. We stayed at the four star Hotel Begolli that was really nice costing close to nothing, had a pizza in the center, walked around, took pictures and spoke to people. One evening and one morning was enough for Prishtina, we walked in the direction of the bus-station, met a guy that drove us there.. (always wanted to try that!) and went on.. to Skopje, Macedonia.

I’ll write more some other day.. now we’re going back out to enjoy beautiful Ohrid.