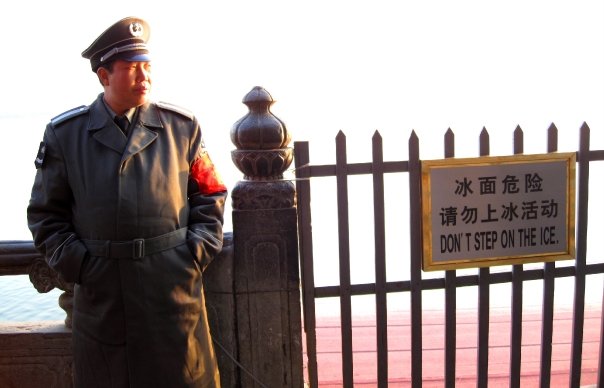 The person that became my best friend in China in 2008 suddenly answered an email I wrote a couple of years ago:

My email account in yahoo has been hacked and totally mess there so I did not use it anymore. Today I check what it is going on with that email and I find you!!!!!!!!!!!!

I did not use facebook for a while cause lots of my friends are not there.

I’m on my first year of PhD studies and…

Made me so happy – couldn’t have thought of a better place to bring that book than to the world behind the golden firewall. China was different from South America in all the ways possible. The huge contrast between freely travelling around a hot, salsa-loving, hippie friendly continent, and going to do academic research and participate in conferences in a very cold, grey, complicated and strict China was so huge that it became the foundation of my experience. The contrasts absorbed everything, everything was new, different, colourful, and wouldn’t stop amazing me.

The spicy street food, the language, the silent battery-driven scooters that would swoosh by like ghosts, the curious people, the shy smiles, the helpfulness of strangers. And then there was the lack of sarcasm, the cultural tip-toeing, the internet censorship, the incredible difficulties in communicating, the ever-present hierarchies, the uniformity in everything, the grey box that the whole society seemed to be forcefully squeezed into, the never ending struggle with authorities and the oh-so-very sensitive issue of “losing face”. It was a love-hate relationship.

I have never travelled a country as difficult as China. With all road signs in Chinese and very few English speakers around, my wish to move independently and understanding the culture more gave me no other choice than learning at least the basics of the language. So I stayed to study Chinese in Kun Ming, my favourite of the Chinese cities. This green gem in the Yunnan province was where I had a small and very moldy apartment in the university area. I also had a good friend there, Lu Chen, and we would meet for Korean kimchi sushi almost daily and talk about random things. She liked rock and was a little bit of an outcast, she wanted to travel, do things, and was very cool. Lu Chen gave me a Chinese name, Meng Xin Min.

My experience in China was also very different in the way that I spent most of my time alone. I spent time in hotels and travelled huge distances by trains and buses, one trip took me over 45 hours, and I read, listened to music, and spent a lot of time communicating with strangers using the little Chinese I knew and continuing with sign language and dictionaries. It wasn’t until I came to Beijing that I actually stayed in a hostel and met friends, went to a Christmas party at the Swedish embassy, danced and sang karaoke. Before that it was all just.. that grey box. Not having a common language with people automatically makes you quite lonely and detached, a very introvert but also rewarding process – quite harsh two months.

Now, a beautiful thing about Chinese people is that despite their shyness, they really want to know what you are saying, they want to talk and they want to be helpful. Once a group of busdrivers invited me to share their meal during a break on the road, another time I watched a strange musical soap opera with a young man on a bus. One specially inspiring meeting and memory is that from a 14 hour train ride, where the man next to me spent hours going through my dictionary and writing down the right words he found in English, until he had composed a three sentence invitation to come to his house and meet his children and wife in a city very far away. I fell asleep on that same train, and woke up to find people sleeping all over the place. On my shoulder, under my seat, under the table. I had to curl up like a meatball for my legs to fit in this cheapest “hard seat” class that I had gotten my ticket in. Vendors were selling oranges, candy and hot water for instant noodles. Everybody had some kind of music on from their mobile phone and they were singing along out loud, some people were smoking.

In the next wagon there were private little booths with clean white sheets, warm covers and soft pillows.. But that wagon was never an option for me in the first place, then I wouldn’t have met all those inspiring and sweet people. Imagine how sad that would have been.

Here are the colours: