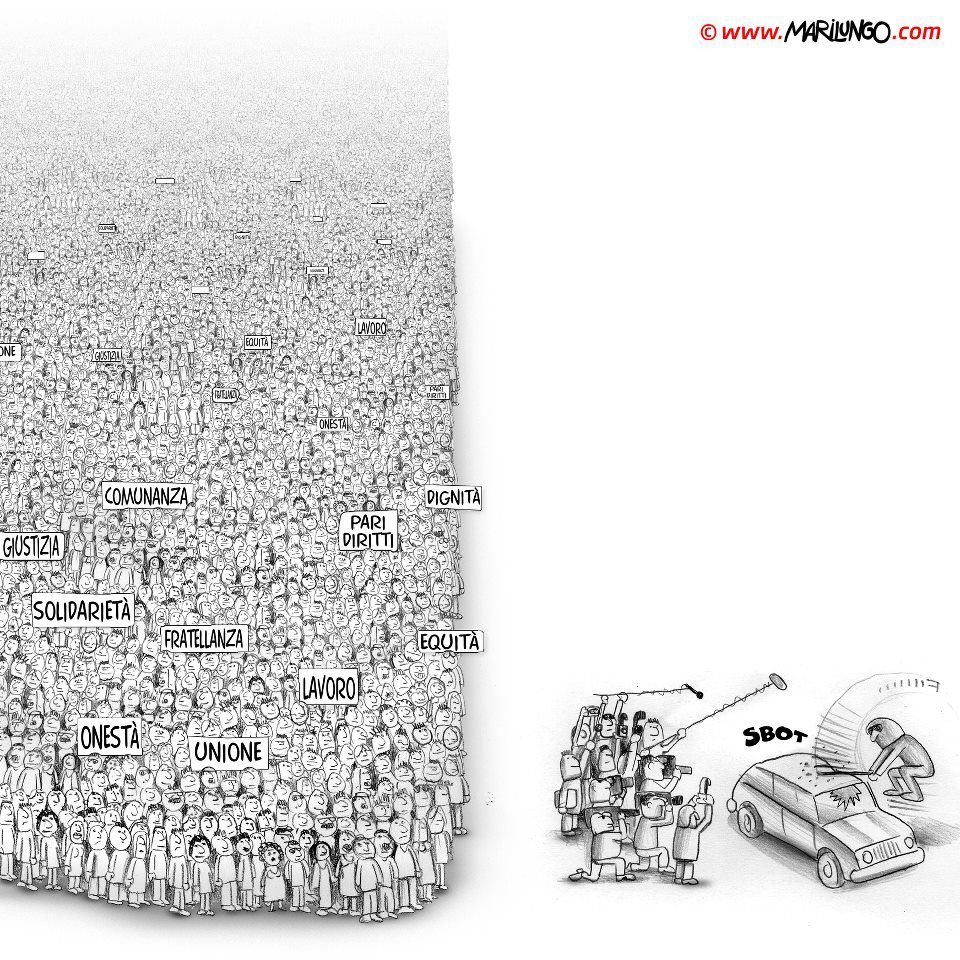 The role that media plays in protest settings is huge. I’ve been there, seen it, been part of it. We, the photographers, reporters, people filming with mobile phones, have a huge responsibility. Both in getting the material out there, but also in trying our best to show the right image of what actually happened.

The young Italian photographer Ruben Salvadori has made a study and a presentation about the phenomenon of when people taking part in protest tend to get more violent when in front of a camera in order to give the photographer a good shot.

Ruben Salvadori – “Photojournalism behind the scenes” Barcelona sin miedo. Photo taken by me during the protests of #Spanishrevolution. Barcelona, May 2011. Current stats in flickr: 8,380 views.

The camera is a very powerful weapon, but it is also important to remember that it often is difficult to get media attention if there is nothing “sexy” in the images that come out from popular protest. And without media attention, the chances of actual change decrease significantly when dealing with a counterpart with more power. A great example of this is the village of Bil’in in Palestine, that I visited in 2010. My photo of a woman protecting herself against teargas during one of the weekly demonstrations in Bil’in in April 2010.

With weekly demonstrations every friday since 2005, they have had to stay creative in order to keep the attention of the media, while trying their best to continue insisting on protesting non-violently, despite deep frustration.

These are excerpts from the very interesting movie Bil’in Habibti from 2006, by Israeli activist and filmmaker Shai Carmeli-Pollak, who’s brother I met in April 2010. As some of you know, I wrote my Master thesis on constructive non-violent action in Israel.

So, while photographers and media sometimes try to create visuals more dramatic than the actual setting, there are much larger quantities of serious violence and injustice that go completely unnoticed. The protests of #spanishrevolution were very poorly covered in Swedish media, not to even wish for any updates from places like Burma, where all footage must meet with the approval of the censorship board.

If you ask me, I think it’s perfectly okay to ask for attention where outer influence is of significant importance, but the photographer’s responsibility is to be very careful in order not to lose credibility or, in worst case, spark violence.