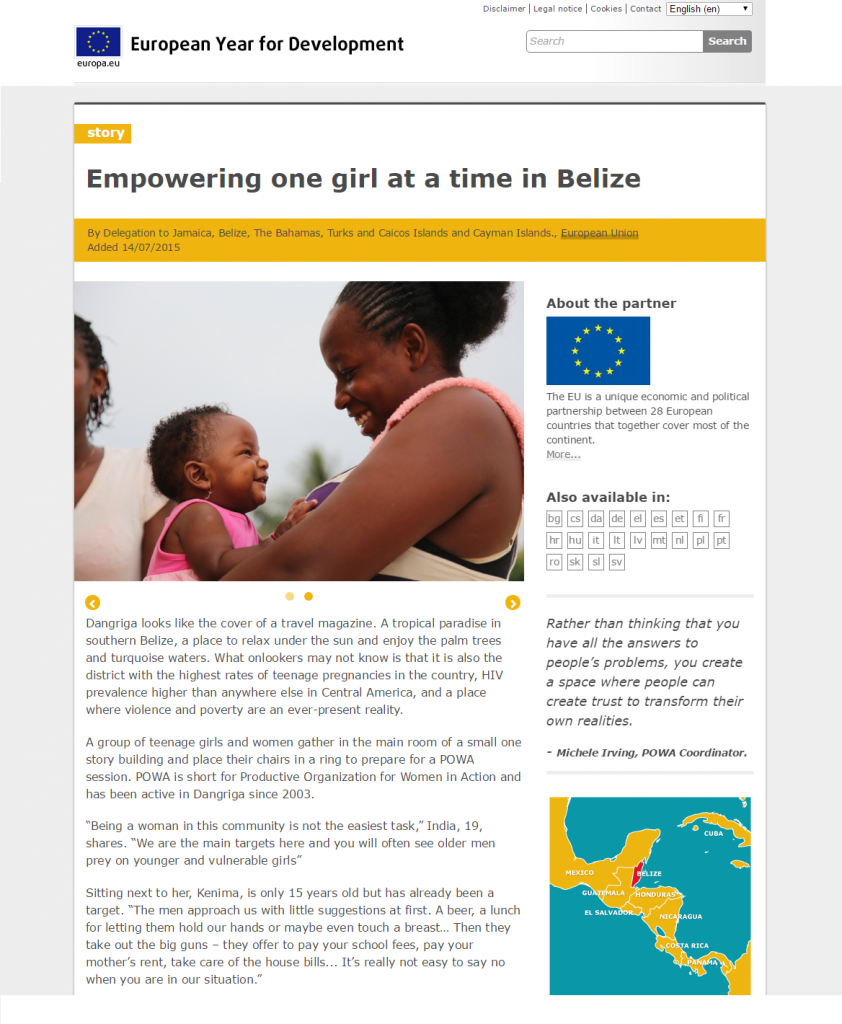 A story I wrote about an NGO that UNICEF Belize works with in the south of the country has been chosen as the July highlight for the European Year of Development 2015 and translated into 23 languages! I’m very glad that the little country of Belize and the work that this great NGO is doing are getting more exposure internationally.

To read about the lives of young girls in Dangriga and the work of POWA in English or other languages, click here: https://europa.eu/eyd2015/en/european-union/stories/week-29-empowering-one-girl-time-belize

“The men approach us with little suggestions at first. A beer, a lunch for letting them hold our hands or maybe even touch a breast… Then they take out the big guns – they offer to pay your school fees, pay your mother’s rent, take care of the house bills… It’s really not easy to say no when you are in our situation.”

Read the full story, in English, below: 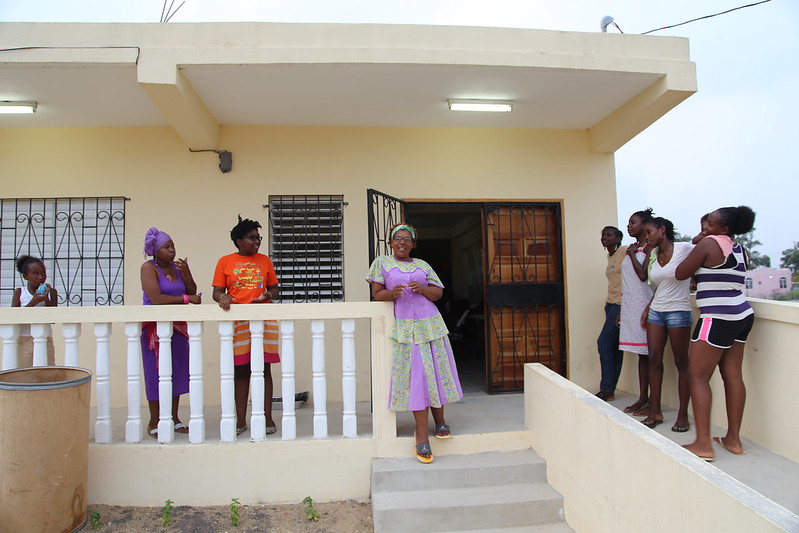 Dangriga looks like the cover of a travel magazine. A tropical paradise in southern Belize, a place to relax under the sun and enjoy the palm trees and turquoise waters. What onlookers may not know is that it is also the district with the highest rates of teenage pregnancies in the country, HIV prevalence higher than anywhere else in Central America, and a place where violence and poverty are an ever-present reality.

A group of teenage girls and women gather in the main room of a small one story building and place their chairs in a ring to prepare for a POWA session. POWA is short for Productive Organization for Women in Action and has been active in Dangriga since 2003.

“Being a woman in this community is not the easiest task,” India, 19, shares. “We are the main targets here and you will often see older men prey on younger and vulnerable girls”

Sitting next to her, Kenima, is only 15 years old but has already been a target. “The men approach us with little suggestions at first. A beer, a lunch for letting them hold our hands or maybe even touch a breast… Then they take out the big guns – they offer to pay your school fees, pay your mother’s rent, take care of the house bills… It’s really not easy to say no when you are in our situation.”

Young girls in Dangriga find themselves lost in a system where they aren’t expected to have ambitions to ever provide for themselves, and where their own mothers feel that they have no other choice than to encourage them to accept these offers to save the family and put food on the table. The high HIV prevalence in Belize confirms this reality, as rates are highest among young girls and old men, many of whom unknowingly keep spreading the virus. Teenage pregnancies are the main reason for school dropouts, and sexual abuse is one of those things everybody knows about but too few dare to report.

Michele Irving, the coordinator for POWA, explains, “We work on the self-esteem of girls, on keeping them in school, teaching them about safety and trying to keep them away from dangers. We target girls at risk and we try to support them with school stipends and giving them practical skills that they can use to secure their own income and become economically independent. All of this to keep them away from falling victims to this horrendous abuse of power.”

POWA’s initiatives have been supported by UNICEF and the European Union since 2006. Under the leadership of Michele Irving, POWA runs after-school programmes for vulnerable children, literacy and school completion programmes for women, an HIV prevention and stigma and discrimination reduction programme, and conducts extensive work on empowerment of women and girls.

“Rather than thinking that you have all the answers to people’s problems, you create a space where people can create trust to transform their own realities,” Michele explains. Sexual abuse is so commonplace that mothers, most of whom have probably gone through the same situations, often choose to not see it. “They will tell you to forget it and never mention it again,” one of the girls whispers.

“But now, when the male teacher in class says something nasty in our ear, or when men try to touch us, we scream, we say no, we report,” Kenima shares with a confident voice. “Nobody can tell me that it is ok.”

Michele continues, “my passion comes from seeing lives transformed. I know I can’t save the world, but I can save one, two, three of these girls and help by making one day at a time better, by giving them the capacities to change their own lives.”

In fact, by changing the girls’ lives, Michele and the POWA programme do much more. They break the law of silence, change the power dynamics and create role models for other girls to follow, allowing them to grow to be concerned, protective and empowered women. 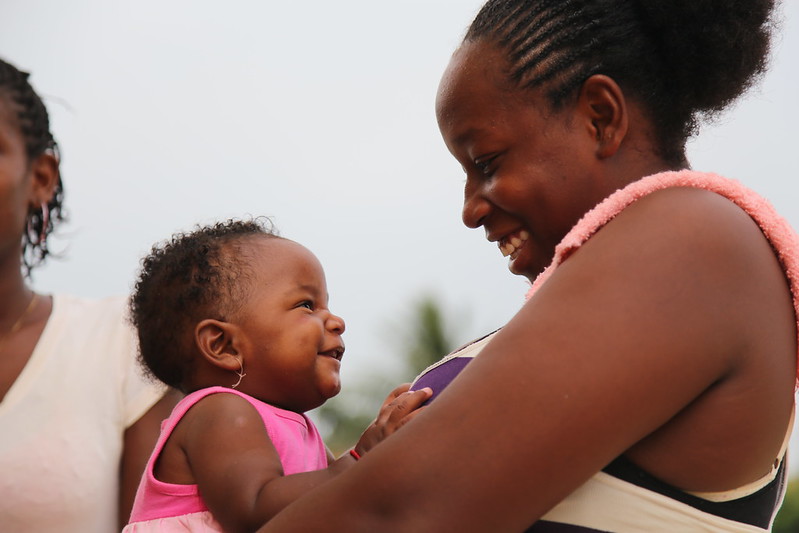