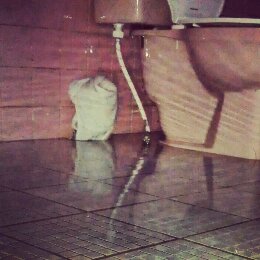 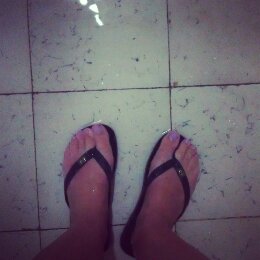 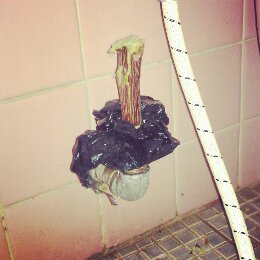 Suddenly, the sound of water. And my brain, always a little bit awake, starts shouting: “That sound is not a part of your dream and it doesn’t sound well at all.. wake up Caroline, wake up!”

I shoot up from my bed and into my bathroom, and get completely showered by water. “What is this? Is it even safe to touch the switch to turn the lights on?” The walls are wet, but not enough. I turn the lights on and find the pipe that supplies my toilet with water completely broken, the water is shooting straight out from it.

I guess these are things that happen when the pressure from the water is stronger than the pipes aimed to keep it under control.. the tap has been impossible to close completely for more than a week because of the pressure, and it’s always worse in the night and morning. Question: Does water pressure in underground water pipes have anything to do with the tide in the ocean? It’s a long shot but not completely impossible, and there’s that super moon coming up in just a couple of days.. I will google this! Haha.

So, after having the security guard run two blocks down to get the right tool to turn off the water completely in the house while I built a home-made tap consisting of 1 sponge, 1 hairband and 2 towels, (that didn’t really work but at least transformed the water-volcano into a smaller geizer) and spending more than one hour moving the water out of the house, I am having a seat.

The guard closed the pipe temporarily with a more ambitious MacGyver method involving isolation paste, a plastic bag and a stick.. (it works for now)

Today’s lesson learned: A broom is far more efficient than a mop if the aim is to move large amounts of water.

At least the entire house got a proper floor wash. At 4am in the morning. Ain’t nobody got time for that.