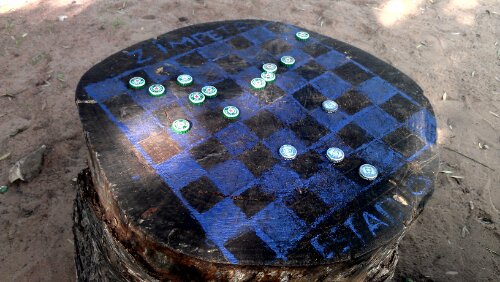 Today, on the way home after a late dinner, we were stopped by the police.

First, a man in a worn out white hoodie approached us and I thought that he was considering robbing us. Then his colleague, a man in a police uniform, came, which of course doesn’t necessarily mean that he is a police officer. That’s when I saw the gun and decided to give him my ID.

“You know we are all good friends here, we don’t want to put you young people through trouble by taking you to the police station. Let’s solve this here and now”

“But for what? No crime has been commited.”

“We can tell our story at the station and you can tell yours, it will take all night but as you say, it’s the right thing to do.” The gun, the darkness, the guy in the hoodie looking like a bandit and separating us to ask intimidating questions. The escalation of it all.

2,5 hours, three police officers and ten mosquito bites later, the threats and made up stories escalated as they were being passed on from one officer to another. All of them asked for bribes throughout the process despite our refusal. Blackmailing and corruption as direct and open as it gets.

The amount of disgust I feel towards the corrupt officials here is not even to be described. If anybody ever asks me what the worst thing was about Mozambique, I will undoubtedly answer: The horribly corrupt police force and system.