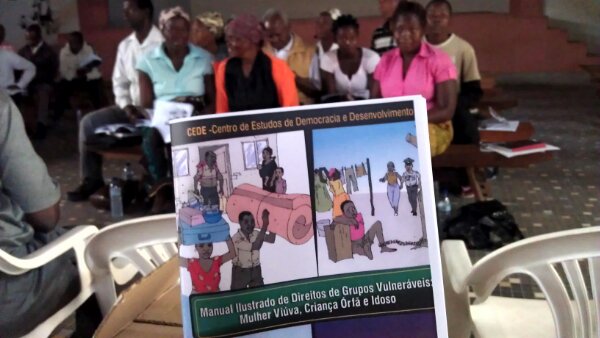 I was literally falling asleep when writing yesterday’s post, which also is the case now – so please excuse any grammatical disasters.

Today we got up early again and went off for meetings with our partnerorganisations here and around Inhambane. Among the different places we saw, we visited a church in Jangamo where men, women and youth representing different communities were present to learn about what the Mozambican law says about human rights. The Center for Democracy and Development studies has created a fantastic booklet with drawings that explain the law with examples from a traditional Mozambican context. Some of the things we take for granted are obviously not so simple for other people and some might even be prepared to debate for their right to be traditionally married without their own consent. Meanwhile, some people have never been presented with alternative ways of understanding and handling a given situation, nor have they been aware of what the law says. Letting people know that domestic violence or sexual abuse of children is against the law, and telling both women, men and youth so – helps them to understand their own rights, and to respect the rights of others.