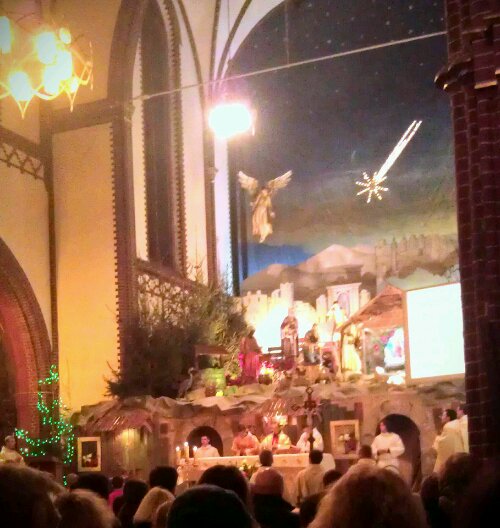 I am trying to keep this space somewhat neutral in terms of both politics and religion. But as I am celebrating Christmas with my family in very catholic Poland it just won’t work right now..

I attended midnight mass tonight, it’s something we do every year. For some it’s tradition, for other’s it’s the main purpose of Christmas and for some the feeling of guilt and shame would be almost lethal if they chose not to go.

Last years I have chosen to actually listen to what the priest is saying and how he uses his voice, which has been highly interesting.

Today’s speech started with the story about how God chose to become a baby and the beauty of the most powerful being in the world asking for help, crying out his needs and being completely vulnerable and giving humanity his trust.. a message telling us that we have to be attentive to the needs of the weaker and less priviledged and how Christmas is about sharing and showing solidarity with each other..  then the priest somehow wandered off to how the communists and facists bore the responsibilities of millions of deaths, because God always finds his way back into our lifes – so “when you take the holy cross off the walls in schools and legal institutions, it shows up in cemeterys and at the sides of roads”. He continued talking about the darkness of today’s world, about how people distract themselves with computers and sex.. and get absorbed by excessively focusing on  working and on various types of charity work [sic!] instead of meaningful practices such as connecting with God.

The absurdity kind of culminated when he explained how gay pride parades are the unquestionable proof of how evil is spreading in the world. We were originally warned with a very clear message from God at the time when volcanic lava covered the ancient Gay-city of Pompeii. Those who do not see this obvious connection are distracted and brainwashed by modern society. I seem to belong to that group.

..if he only knew who I will be dancing with in a couple of days.